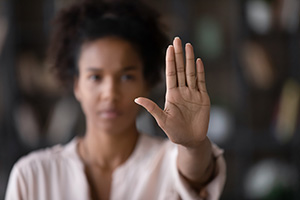 “Someone I Know is being Abused…”

Someone in the US is abused by someone they love every 15 seconds.[1] Anyone can be in an abusive relationship, regardless of age, race, income, gender, sexuality, or religion. Domestic violence is extremely common – at least 25% of women and 10% of men are estimated to have experienced domestic violence.[2] Since 1981, October has been designated Domestic Violence Awareness Month, to educate and raise awareness about domestic violence, and to let people who have experienced it know they aren’t alone.

Domestic violence can be hard to see, and even harder to break away from. At its core, domestic violence and abuse is about control. The abuser uses physical, sexual, or psychological means – such as making someone feel worthless or isolating them from others – to keep control over someone.2 A person who is being abused may want to believe the abuser can change. Or the situation may be so unsafe that it’s hard to see a way out.

Domestic violence, also called intimate partner violence, occurs between people who are or have been in an intimate relationship – spouses, partners, and exes. It often begins slowly and gets worse over time. Common types of domestic violence are:[3]

Domestic violence can occur only once, but it often continues over time. Sometimes, the violence will follow a cycle of abuse – apology – abuse, where the abuser seems to have changed their behavior.

How can I help?

If someone you know has experienced domestic violence, there are things you can do to support them. Here are some suggestions:[4],[5]